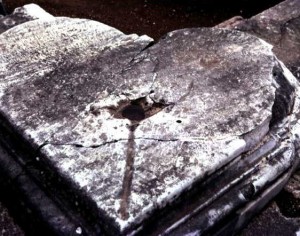 Philippi, in the north of Greece, was a significant city in the history of Christianity. St. Paul visited the city and wrote a letter to the community there, which is in the New Testament of the Bible. While Paul may be seen as someone who suppressed women, based upon other letters in the New Testament that were written long after his death, he in fact had strong women as colleagues. Archaeological excavations at the ancient site, dating back to the late 19th century, have unearthed proof that women leaders and female deities had a long history at Philippi and were still present during Paul’s time and into the early Byzantine era. The column base pictured, which dates much later than Paul, nevertheless can serve as a symbol of love, a major aspect of the Gospel that Paul and his contemporaries were preaching.

Here is what is important even two millennia later:

Do not let anyone tell you that the early Christian church was hostile to women! While women were not “liberated” in the same sense that women may be liberated today (in the modern West, at least), they were active participants in many levels of society and serve as positive role models for us today, in both church and society.