Welcome to Wisdom Words — Past, Present, and Future. Blog posts are scheduled for the second and fourth Fridays of the month at 6:00 am Eastern Time. Thank you for being an engaged citizen with intellectual curiosity!

Book opportunity! Contrary to what we may be led to believe, we can know to a large degree what happens to us after death. In my 2015 book, Paranormal: A New Testament Scholar Looks at the Afterlife, I examined four types of evidence for the survival of the individual soul after death. You will be amazed and comforted by the lessons gleaned from that evidence; my findings and conclusions are as much about our lives on earth as our lives on “the other side.” 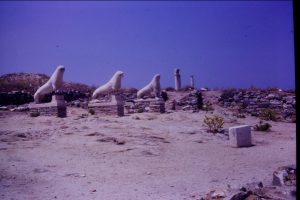 The Lions of Delos

Some of us believe – were brought up to believe – that the English language that we speak in the United States has grammatical rules and that following those rules is a good thing. Speaking our language well makes us understandable to each other (at the very least), and it is a positive in many […]

“After this, Jesus traveled about from one town and village to another, proclaiming the good news of the kingdom of God. The Twelve were with him, and also some women who had been cured of evil spirits and diseases: Mary (called Magdalene) from whom seven demons had come out; Joanna the wife of Chuza, the […]