With the accusations against Hollywood film producer and executive Harvey Weinstein coming fast and furious, we are once again confronted by the specter of sexual harassment and assault in the United States. Of course, the situation should not come as a surprise (although sometimes it seems to): within only the past few years, we have seen accusations, articles, new stories, videos and court cases against Bill Cosby, the late Roger Ailes, Fox host Bill O’Reilly, nearly two dozen Uber employees, and even our own President, Donald J. Trump.

For some of us, these stories are met with disgust and rage – and amazement that this despicable behavior on the part of some powerful men still continues in 2017, since we have been dealing with this problem nationwide for decades. Full disclosure: I myself was sexually harassed in various ways by two tenured Harvard professors in the late 1970s and early 1980s. I remember well when the stories of Anita Hill’s accusations against then Supreme Court nominee Clarence Thomas emerged in 1991; we thought, “Whew, now that this is out in the open nationally, our anger and disgust about what happened to us is finally vindicated, and maybe we can stop this from happening to others.” 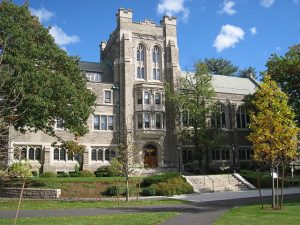 No such luck, unfortunately. For my part, when I received my doctorate from Harvard Divinity School in 1986, I volunteered to be on the Alumni/ae Council and proceeded to tell my fellow Council members what one of their illustrious professors had done to me (no rape, fortunately, but a lot of groping and some French kissing over a two-year period). Within a short amount of time, the Dean of Students was initiating panel discussions on sexual harassment. Around the same time, Harvard, other institutions, and the wider culture also began to take the problem seriously and craft laws and rules to combat it. I am proud of what I was able to accomplish in a small way at my alma mater, and by doing what I did, I emerged from the situation stronger and more confident than when the victimization started. (In the case of the other Harvard professor, who was required to take a semester’s sabbatical and undergo counseling after he was accused of sexually harassing one of his undergraduate students, he made passes at me in his home, while his wife was out walking the dogs. When I told his wife what was going on, I not only lost her and their children as friends but he also proceeded to menace me and write me a threatening letter.)

So, despite the heightened awareness of both women and men that certain behaviors are off-limits and the laws that have been put in place to combat such behavior, the problem continues. The situation actually seems intractable, in part because it is multi-faceted. I suspect it may never be entirely solved – there will always be bad actors, unfortunately – but by constant vigilance on everyone’s part and by tackling a multitude of issues simultaneously as a society we can perhaps make further progress.

Let us parse the situation from several angles.

This, then, brings us to what might be done to tackle the sexual harassment problem in the US. First, we cannot be naïve that the problem actually exists. The percentage of false accusations is very small; most victims of sexual harassment or assault do not have any desire for “15 minutes of fame” because of their harrowing situation – part of the reason that many assaults go unreported.

Second, good, decent men bear some of the responsibility of fostering healthy workplaces and other environments; tackling the pervasive issue of sexual harassment and assault is not just the responsibility of women. Men should be encouraged throughout our culture to cultivate their own empathetic sides, find ways to challenge any of their friends or colleagues who might tell sexist jokes or brag about “conquests” of women, and so on.

Third, all institutions should constantly pay attention to this issue; the good ones already do. There are ways to cultivate healthy, safe atmospheres; institutions have an obligation to their employees, shareholders and clients to combat all forms of intimidation, bullying, harassment, and assault and should build the cost of any preventative methods into their annual budgets.

Fourth, we all need to be aware that there are psychopaths in our midst – in our families, our neighborhoods, our legislatures, our churches, our schools, etc. It is highly likely that psychopathology not only starts early in life, according to the experts, but probably has no cure. This is extremely sobering. But talking about the disorder openly, hearing media reports from experts in the field, learning how to protect oneself (for example, reading the signals much earlier in a relationship), and having the courage to stand up to a psychopath (if that is safe) to counter his or her bullying are all steps that can help in combatting harassment.

Fifth, just as it is important to know about psychopaths in our midst, it is also crucial that women and girls know their legal rights; way too many of us never knew about statutes of limitations, for instance. (I ran into this when trying to complain about my non-HDS perpetrator; I could tell that the official I was speaking to already knew about him and was probably sad that she could do nothing for me, because I was only a few months too late in making my report.) Parents, schools, the media, and human resources personnel in workplaces are among those who should take responsibility for getting the word out about women’s rights and steps they can take if victimized.

Sixth, are there ways in which the laws can be tweaked to assist victims financially, to better equalize the monetary aspect of this problem? Could states, the private sector and nonprofit organizations work together to establish a pool of funds to assist victims with legal fees? Perhaps something like this already exists somewhere. Such collaboration would provide incentive for all sectors to take sexual harassment and assault seriously; costs would presumably go down if incidents of harassment went down.

Eighth, well-known attorney Gloria Allred, who represents many of Weinstein’s victims, has proposed a productive solution in the Weinstein situation: “I am inviting him to agree to engage in an arbitration of these claims with these alleged victims and with an agreed upon retired judge. The women could present their claims of sexual harassment and Mr. Weinstein could present his defense. If the judge finds in favor of the victims, the judge could award damages according to proof at trial. If Mr. Weinstein prevails, he would be able to announce the result to the public. In the alternative, he could also agree to a confidential mediation process to resolve these claims. This proposal is similar to what I suggested to Bill Cosby. He was not wise enough, however, to accept my invitation to resolve the allegations against him. Will Mr. Weinstein accept the offer of a process that is fair to him and will help to provide a system of justice to his accusers? We will have to wait and see.” Who “out there” is brave enough to consider Allred’s proposal and “bake it” into our legal system?

Hare, Robert D. Without Conscience: The Disturbing World of the Psychopaths among Us. New York: Guilford, 1999.