A new process for recovering DNA has led to findings that significantly “marry” two very disparate areas: church history, archaeology and religion with research on livestock in earlier eras. The report by Zach Zorich in Archaeology magazine (November/December 2017 issue) outlines this exciting “marriage.”

Parchment – the material from which some ancient illuminated manuscripts were made that comes from the hides of cattle and sheep – is the common element. Researchers examining an ancient manuscript containing the four gospels of the New Testament developed a process of carefully rubbing a white plastic eraser to create static electricity on the surface of the manuscript’s pages. Small amounts of the pages’ material come off with pieces of the eraser and can then be analyzed. This process, according to the researchers, can be used on bone, ivory or other protein-based materials.

The manuscript on which the process was first used, housed in York, England, was made around 990 CE by the monks at Saint Augustine’s monastery in Canterbury, England. The manuscript is still used in ceremonies at the Cathedral and Metropolitan Church of Saint Peter in York, the York Minster, where it has resided since about 1020 CE. Because the manuscript’s history is so long and so many hands have touched it, the DNA left on it is rich. But it is vital that normal means of DNA extraction, which destroys part of the object, not be used on such an historical and unique artifact – thus the significance of the new process.

Several other interesting findings have emerged from this experiment. First, the manuscript is made primarily of female calfskin. One would have expected, in a society that used cows mainly in dairy farming, that the calves that would have been killed for use in manuscripts would have been male. The investigators speculate that the female calfskin might have been used in this particular case because of an outbreak of murrain disease that greatly affected cattle in Great Britain and Ireland in the late 900s.

A second finding from the experiment and process was that it “revealed which pages had been handled most frequently. . . . Those pages contain the oaths that the clergy use to swear themselves to the church.” Third, a challenge to the preservation of the manuscript was discovered in the form of “bacteria from the genus Saccharopolyspora, which can cause a measles-like spotting of the pages [and which] was found throughout the book.” This discovery can be used to find ways to stop the progress of the bacteria before it can irreparably damage the book.

Finally, this DNA research can be used to examine hundreds of years of changes in livestock. As noted by researcher Sarah Fiddyment of the University of York, “Parchment is this incredible untapped resource. Basically what you’ve got all over the world is millions of animals that are dated and located.”

Science meets religion (and other fields) in a fascinating way! 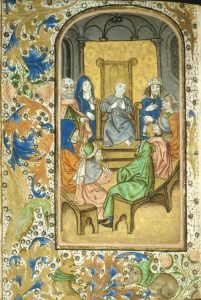