As we saw earlier, Mary Magdalene is a figure in the New (Christian) Testament of the Bible worth considering by us moderns. She is significant, in part, because she is so prominent in the canonical Christian texts: she appears numerous times in the New Testament and in all four gospels: Mt 27.55-56, 61; 28.1; Mk 15.40-41, 47; 16:1, 9; Lk  8.2; 24.10; Jn 19.25; 20.1, 11, 16, 18. Mary was a follower and close companion of Jesus, she was identified with the woman out of whom Jesus cast seven devils, she stood by Jesus as he died on the cross and, with two other women, discovered the empty tomb. She appears and is named in all resurrection narratives, showing that early Christians recognized in her a very important figure. 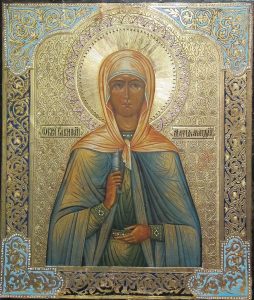 In scholarship and many religious circles now (Carroll and Schlumpf, for instance), it is being acknowledged that her former reputation as a prostitute is untrue. Her identification as a whore is due to a complicated conflation of texts influenced by prejudice and a male fascination with sex and eroticism. She is not the woman who washed Jesus’ feet with her tears and dried them with her hair (Lk 7:36-50); as Osiek explains, this woman was described as a sinner, and “in the male imagination, only one sin could require such dramatic repentance: she had to be a reformed prostitute.” This image as penitent sinner, which developed mainly in the West, led her to be portrayed as spending her life in penance and monastic asceticism – the image often seen in famous paintings in museums around the world. The identification of Mary as a prostitute is found in Ephraim of Syria (306-373) and became official by the time of Pope Gregory the Great (540-604).

This powerful assertion by church fathers shows how persistent and dangerous faulty interpretations can be. Rather than celebrating Mary Magdalene as the premiere apostle, leader and devout follower of Jesus that she was, some influential male church leaders wanted to show that her main function in the Jesus story was “repent of your egregious sexual sins.” Let us take the debunking of the Magdalene’s bad reputation a step further and examine her level of authority in the early Christian era, especially as compared to St. Peter.

Mary’s story and her relationship with Peter and the other early male disciples come primarily from extracanonical texts from later centuries. Her portrayal in this literature is important because it shows the persistence of Mary’s renown for centuries as well as the significance of women to the movement’s growth – it was not only famous (and often misogynist) men who created and spread Christianity.

The Gospel of Philip is a text that circulated between 180 and 250 CE. In chapter 63.34-64.5, we learn that “Jesus loved Mary Magdalene more than all other apostles, called her Apostle to the Apostles and ‘the Woman Who Knew the All,’ and often kissed her.”

The Dialogue of the Savior from Nag Hammadi, Egypt, probably written in the second century, has the Magdalene posing a question to Jesus in the context of his ascension (Cartlidge and Elliott, 42).

The third-century Pistis Sophia has Mary Magdalene questioning Jesus approximately 39 times (Puech, 257), and she was then addressed as “dearly beloved” (Walker, 613).

Mary Magdalene is featured prominently (though negatively) in the Gospel of Peter (late first century CE) and in the Epistula Apostolorum (early second century CE). In Gosp Peter 12-13, the familiar story of Mary and the other women finding the stone of the tomb rolled away is related, with the women fleeing in fright without telling anyone what they saw. The text ends with Peter and Andrew returning to their jobs as fishermen. Similarly, Epist Apost 9-11 relates how the three women, Mary Magdalene, Sarah and Martha, tried to tell the male apostles that Jesus had risen but the men did not believe them; in fact, they accused the women of lying. The men eventually believed, but the women were not given credit for their message or visions. They ultimately fade from the scene.

In both the Gospel of Peter and the Epistula Apostolorum, Mary’s prominence in the movement and her leadership role lie just beneath the surface, reflected in the writings but not honored by them. It is only in the Gospel of Mary of Magdala, dated 120-180 CE, that her side of the story is more positively and definitively presented. She is portrayed as a close friend of Jesus who has received special revelations that are different from those of the male disciples. Levi defends her while the other disciples come across as “divisive and uncomprehending even after the resurrection” (King, 176).

The tension between Mary and the male disciples should not come as a surprise given the misogyny evident throughout Christian history. In the Dialogue of the Savior, for instance, where Mary is featured with Matthew and Judas (not the Judas who betrayed Jesus), the fragmented text has Matthew say, “‘Pray in the place where there is no woman’ and ‘destroy the works of femaleness’” (Thompson, 117; Koester and Pagels, 237).

It is important to note the other early Christian literature that was circulating at roughly the same time: the letters in the Christian Testament attributed to St. Paul but written after his death – Ephesians, Colossians, I and II Timothy and Titus – which include anti-woman decrees, and some of the earliest church fathers, who discouraged if not prohibited women priests. There were obviously strong, influential women in the nascent Christ cult, and that was threatening to male leaders.

As might be expected, then, Mary as especially in disagreement with Peter perhaps reflects the pinnacle of tension vis-à-vis church authority. In the Gospel of Mary, as Mary encourages the disciples when they are discouraged, Peter asks her to tell them about her vision of the risen Jesus. When she does, however, “Peter and his brother Andrew attack her credibility, questioning whether Jesus would really have spoken with a woman and preferred her to them” (Osiek). Mary becomes upset and cries, “My brother Peter, what do you think? Do you think that I thought this up myself in my heart, or that I am lying about the Savior?” Levi comes to her defense and calls Peter “hot-tempered” and someone who is contending with Mary as if she were an adversary (MacRae and Wilson, 473).

This conflict with Peter is echoed in the Gospel of Thomas, when Peter says to the other disciples, “Let Mary go out from among us, because women are not worthy of the life” (logion 114; Puech, 343). As King contends, in the early Christian era, Peter was not the important disciple that he later became – one of the “pillars” of the early church, the so-called Prince of the Apostles and, according to tradition, the first “pope.” Rather, Peter was viewed early on as “a jealous and contentious character, who cannot see beyond his own male pride” (King, 177).

In contrast, Mary was “consistently represented as a faithful disciple.” Her unwavering faith and steadfast character were quintessential qualifications for the ability to preach the gospel and promulgate the Savior’s message (King, 177-84).

It was not, we know, Mary Magdalene who gave her name to the square at the Vatican. Peter and other male disciples won out on that score and many others. It is not too later, however, to honor and lift up the Magdalene – and the other strong women – who spread a message of love, generosity, spiritual maturity and faithfulness to a hurting world.