In our last post, we discussed the Rev. Franklin Graham’s negative attitudes toward same-sex relationships, especially in the context of his criticisms of Democratic presidential candidate Pete Buttigieg and Graham’s use of Bible verses to support his stances.

Here we will outline some of the scholarly research concerning same-sex relationships in the early church (from the time of Jesus into the Byzantine era), since these passages are prominent in the anti-LGBTQ arguments of conservative Christians. We will see how, in many instances, early Christians, their leaders and their pagan peers not only tolerated same-sex relationships but at times even celebrated them, putting the lie to the conservative argument that God always condemns them.

To start with, let us be clear: the term “homosexual” is not found in the New (Christian) Testament (NT), and same-sex relationships are not directly discussed by Jesus – the man that Graham professes to be “his Lord and Savior.” There is ample evidence – by reading the texts that have come down to us and through more than 100 years of Biblical scholarship – that the man Jesus, a Jew, focused his ministry (of one to three years) on the Kingdom of God.

This Kingdom/Reign was one of justice, mercy and love, and was in opposition to the contemporary Kingdom, that of exploitative, ruthless imperial rule. If contemporary Christians want to take their life cues from Jesus’ life, they must view Jesus as loving, compassionate, inclusive, self-giving, wise and gentle.

While it is the gospels (Matthew, Mark, Luke and John) in the Christian Testament that provide the outlines of Jesus’ life, the earliest texts in the NT chronologically are actually the letters of St. Paul. It is in two of these letters where we find negative passages addressing same-sex relationships – Rom 1:18-32 and I Cor 6:9-10. As with every verse of the Bible, however, these passages have a larger social and ethical context, a context that is quite different from ours in the 21st century.

In the case of Romans, Brandeis University scholar Bernadette Brooten devotes many pages in her book Love Between Women to an analysis of Paul’s stance.

Regarding the mention in I Cor 6:9-10 of “fornication,” with an implication of homosexual relationships, Brooten discusses Paul’s stance in conjunction with historical Jewish regulations, especially Leviticus 18 and 20 (Brooten, 290). Paul’s concern with same-sex behavior may also be linked to the reputation of Corinth, a large urban center where more of this activity may have been occurring than in more rural areas (Brooten, 261).

NT literature later than Paul also addresses the issue of same-sex relationships: I Tim 1:10 (written around 100-150 CE) and Jude 7-8 (written around 90-120 CE). It is crucial to note that Paul wrote neither of these epistles; conservative Christians maintain that these negative comments – referring to fornication, “unnatural lust” and the ancient cities of Sodom and Gomorrah – were authoritative statements by Paul, but instead they come from a later time in the development of Christianity. Also, in a culture that was so defined by the communal values of honor and shame, early Christians who defied traditional mores were not only viewed as dishonoring themselves but also the nascent community, a minority group struggling for survival and identity. The “deviant” individual brought shame upon him- or herself and even more importantly on the group.

In our current American context, there are probably few of us who think of human, including sexual, relationships in conjunction with natural law, purity and impurity, collective honor and shame, and passive and active roles in society. Further, while we in the US still fail to enjoy completely egalitarian relationships between men and women, we can probably argue that equality does remain a goal, despite the limitations of the women’s movement and legislative initiatives. Therefore, the negative attitudes of Paul and his contemporaries toward same-sex relationships can be seen as context-specific.

We must stress too that many, if not most, people who argue today for women’s and LGBTQ rights do not argue for exploitation, predatory behavior, victimization of the vulnerable, or other hurtful or violent acts or activities.

In contrast to the NT passages that comment negatively on same-sex relationships, we can see that elsewhere in Paul’s letters we find a quite different stance toward same-sex couples and same-sex love. Several actual people with whom Paul had constructive or collegial relationships can, in fact, be viewed as same-sex missionary pairs.

While we know little about the pairs to whom he refers – Evodia (or Euodia) and Syntyche (Phil 4:2-3) and Tryphaena and Tryphosa (Rom 16:3-4) – it is fairly certain that they were not fictitious. Scholar Mary Rose D’Angelo argues, “Evodia and Syntyche can be seen as a missionary couple, partners in the mission, rather than as individual members of Paul’s missionary team. They may in fact have been independent of Paul. . . .Second, . . . the ‘religious conflict’ [mentioned in Phil 4:2] is a dispute not between Evodia and Syntyche but between Paul on the one hand and the two women missionaries on the other” (D’Angelo, 1990, 76).

In essence, Evodia and Syntyche and Tryphaena and Tryphosa were on a par with the heterosexual missionary pairs of Prisca/Priscilla and Aquila (I Cor 16:19; also in II Tim 4:19), and of Andronicus and Junia, Philologus and Julia, and Nereas and his “sister,” all mentioned in Rom 16.

These examples mirror recent literary and archaeological evidence – from inscriptions, papyri, architectural remains, burials, and works of art – that has definitively established that people in Graeco-Roman antiquity did engage in what we would today call consensual, adult same-sex relationships. While much of the evidence on such liaisons may be negative, it serves to demonstrate the very existence of same-sex couples, the lives they lived despite cultural disapproval and, in some cases, the approval of the early church. Here is a sampling:

Homosexual pairings can also be seen in various art forms. Greek vase paintings from earlier antiquity provide proof that female and male couples existed prior to the Roman Imperial period and thus might well have been known to early Christians (Brooten, 57-59, provides five probable examples of female pairs in erotic poses dating from 650 to 350 BCE). “Many hundreds of Greek vase-paintings” also show male couples, usually older, bearded men conversing with younger men or boys (Dover, 4-9). In the early Christian era, a funerary relief from the Augustan era (27 BCE – 14 CE) shows two women clasping their right hands; this posture was generally used to portray a heterosexual union, but the inscription below the relief demonstrates that this was a union between two freedwomen, Fonteia Eleusis and Fonteia Helena (D’Angelo, 65-72; Brooten, 59). In addition, a wall painting from Pompeii depicts two women having oral sex (Brooten, 60).

Moving forward in Christian history, there is archaeological evidence for same-sex burials in the early Byzantine era. Let us cite just a few examples of grave inscriptions from Philippi (Abrahamsen, “Burials in Greek Macedonia,” citing archaeologists):

Finally, the late Yale scholar John Boswell detailed a number of examples of Orthodox and Roman Catholic liturgies from the 10th to the 14th centuries that celebrated same-sex relationships. These include same-sex “marriage” rites from the Vatican and Mount Athos (Boswell, 1994, passim). The fact that these documents exist and were obviously utilized under church auspices is irrefutable proof that same-sex pairs were approved by the church, at least in certain locales (Boswell, 1994, 283-344). Given the other evidence from Graeco-Roman antiquity that we have just examined, the liturgies also demonstrate a trajectory of practice from the early church into later times.

Franklin Graham has a right to his opinions about same-sex relationships and other issues. It may well be that his opinions stem from deep discomfort with certain types of sexual practices, disguised as adherence to “the word of God.” His discomfort also probably emerges from the conservative atmosphere in which he grew up. Another possibility: he may know very few same-sex couples whom he might otherwise respect and love (more probably he does know such couples or gay individuals but they may not be “out” to him). His perspective most certainly stems from his Christian Fundamentalism: his stance, shared by millions, that God has dictated the anti-LGBTQ commandments and that Graham and others like him will burn in hell if he does not believe them wholeheartedly.

Whatever Graham might believe and why, he does not have a right to his own “facts,” especially when he wields enormous power and influence and when his opinions malign innocent people and cause unnecessary psychological and emotional injury.

As we have seen, there is a significant body of evidence showing that early Christians, including early church leaders, did not condemn same-sex love. On the contrary, from Paul – the ostensible “founder” of Christianity – into the Byzantine era the church had a tolerant attitude, if not an outright celebratory one. When Graham ignores the lives of these early Christians, he demonstrates not only willful ignorance of respected scholarship but also a great deal of disrespect for those ancestors in the faith; in this way, he puts his own self-righteousness above theirs.

There were definitely negative attitudes toward same-sex relationships in antiquity, and they must be taken into consideration. Some of these attitudes inveighed against exploitation and cruelty. Others came about because of specific cultural norms that we no longer hold today. No matter where the negative attitudes came from, they were offset by positive attitudes based on love, tolerance, equality and respect.

If Christians are going to use Paul, Jesus, early Christians and Biblical texts as authorities for our lives, it would seem advisable to have the fullest picture possible of the basis for that authority. Many of us – including the likes of Mayor Pete and his husband – would much prefer to view same-sex relationships and love from the positive rather than the negative perspective. 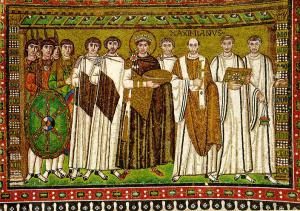