About a year ago, Pope Francis was purported to comfort a child on the death of his pet by saying that animals go to heaven. While the report may be apocryphal (and may or may not actually have been attributed to Pope Paul VI), the survival of animals’ souls after death is a persistent question, and not only for children! 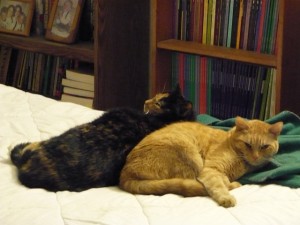 Two of my cats, Giselle and Tyler – still in the physical world

The paranormal evidence – especially electronic voice phenomena (EVP), instrumental transcommunication (ITC), near-death experiences, the visions of reputable psychics and mediums, the postmortem testimony of Sir Arthur Conan Doyle, and the out-of-body travels of Virginia businessman Robert Monroe – reveals that animals do have souls and that those souls survive physical death.

Take a look at these examples:

For much more on death, the afterlife, paranormal phenomena, and the lessons we learn from the themes that emerge from the evidence, please check out my book.

Butler, Tom and Lisa Butler. There is No Death and There are No Dead. Reno, NV: AA-EVP Publishing, 2008.