Jesus was a man, right? In the New (Christian) Testament of the Bible he certainly was. However, in the first few centuries of the Common Era (CE), images of Jesus were not limited to male.

During this era, a great deal of Christian literature, generally called “apocryphal” or “extra-canonical,” circulated but did not make it into the New Testament (NT). Similarly, art depicting images of Jesus, his family, his disciples and their stories was also created, not all of the images taken from NT texts.  In both the literature and art of the first Christian centuries, Jesus’ sexuality could be ambiguous, androgynous or even feminine.

What may be shocking, offensive or bewildering to us most likely resonated for the people of the time and had parallels in the culture. These supposed ambiguities emerged in the Jesus story for a reason, which we will explore here, drawing primarily on the work of Cartlidge and Elliott (see especially pages 60-69). 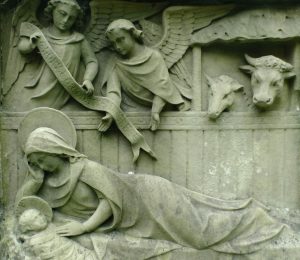 The reference to him as a pre-adolescent (Luke 2:41-52) is simple and short, and of course he never became an elderly person. The overwhelming artistic portrayal of Jesus in the early church was as a youth, vital and full of energy, healing people and working wonders. As Cartlidge and Elliott point out (pages 60-61), “[b]ehind both the Christian Good Shepherd and Jesus the youth lay tens of centuries of savior gods as the criophorus [or kriophoros, ram-bearer] and as a comely young man.” Jesus was in stiff competition with other savior gods of the culture, including Serapis, Apollo and Dionysos.

However, as the Christ cult developed, Jesus emerged in both literature and art in a tripartite (three-stage) fashion: beautiful youth, mature man, and old man. In the Acts of Peter, which circulated in the 2nd century, chapter 20 refers to Jesus as “both young and an old man.” A sixth-century book, the Lupicin Diptych, shows all three types in the same work. As the church attempted to portray Jesus the Christ as divine and thus eternal and all-powerful, these multiple portrayals make sense, despite the fact that Jesus never lived past age 33.

What is more problematic for us moderns is the portrayal of Jesus as sexually ambiguous, with feminine traits. Examples of an ambiguous Jesus are found in both art and literature and, as Cartlidge and Elliott point out (page 66), some of this evidence leads to “intricate academic footwork” and “dodging and weaving” of interpretation; that is, scholars tend to dismiss the importance of images and texts of which they cannot make sense.

Cartlidge and Elliott point out that the debate about Jesus’ sexuality must have been raging from the earliest times of the development of the church, as attested in these literary and artistic pieces of evidence. If the feminine/androgynous Jesus and the tripartite Jesus are viewed from the point of view of ancient, even prehistoric, religion, it becomes more comprehensible as to why such depictions and images appeared and resonated with early Christians. The prehistoric nature goddess (whom we met earlier) was often accompanied by a young, vital male deity, especially in her aspect of the life-creating force; “male animals and humans stimulate and enhance life” (Gimbutas, Living Goddesses, 117). Taken alongside the power and influence of Mary – Mother of Jesus, Mother of God, Theotokos – the appearance of the young Jesus fits this ancient pattern. In the competitive Graeco-Roman and early Byzantine era, the pairing of the powerful Mary with the powerful, younger Jesus made sense.

Similarly, Jesus with feminine characteristics suggests that he took on attributes of powerful female deities in the Graeco-Roman and early Byzantine milieus. If Jesus had characteristics of these goddesses, devotees attracted to them might also be converted to the Christ cult.

Finally, Jesus as young, mature, and old parallels the maiden, mother, crone of the ancient and prehistoric religion, as well as the cyclical nature of the waxing, full and waning moon. All of these stages of life had a place in the natural order of things, and none was any more or less important than the other. For Jesus the Christ to seem fully God to people living in the midst of male, female and androgynous divinities, images of him almost had to age him more than his actual years in order to resonate with the hopeful, eternal cycle of birth, death and resurrection/regeneration. Imagining Jesus in all these ways grew and matured naturally in the contemporary religious scene.