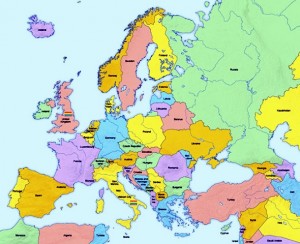 In November 2013, I lost my administrative job at the Smith College School for Social Work with no notice and no warning: they simply eliminated my position and sent me packing. Their ability to do this is a direct result of the all-American employment practice of at-will, which is not found in any other Western industrialized nation. Sudden terminations of competent workers happen all over the US all the time and, except in Montana, those actions are perfectly legal.

In February 2014, I joined an interfaith group in southeastern Vermont in examining the root causes of poverty and how we can attack them (obviously sudden job loss is a potential root cause of poverty). Knowing vaguely that countries in Europe had better outcomes than we have in the US in a number of areas, I began to look at how we compare on a wide range of quality-of-life measures. I focused primarily on countries that consistently came out on top – e.g., Germany, Denmark, the Netherlands, Sweden, Norway – working under the theory that there might be programs and philosophies that made them successful which we could “beg, borrow or steal” (why reinvent the wheel?). I brought up some of my findings in our interfaith group over the following year and wrote a couple of articles for my Episcopal church’s newsletter .  I was finding little about Europe in mainstream media, but I had a suspicion that there was more to the story than just statistics. At the same time, I was myself falling into poverty as my unemployment benefits ran out, which gave me a whole new perspective; I was unable to find even temporary clerical work, and I became eligible for food stamps, fuel assistance, and Medicaid for the first time in my life.

In early 2015, I learned about a 2010 book that has revolutionized my thinking: Steven Hill, Europe’s Promise: Why the European Way is the Best Hope in an Insecure Age. I persuaded my local librarian to purchase the book for its shelves in exchange for my writing a book review (May 14, 2015), and I will use insights from this book in many of my blog posts. Europe is not perfect, but we can learn a lot from the ways in which they harness capitalism for the common good. Europe, not the US, now has the highest standard of living the world has ever known, and it would behoove us to pay attention to how this has come about over the past 60 years.