How is your dollar doing?

A look at some statistics about wages, savings and debt in the US is instructive. If you are not doing terribly well financially, you are not alone – and there are ways out of our collective problems, if we are willing to look seriously at ideas from other nations and compel our legislators to implement them.

As we mentioned briefly in our post on retirement, the dollar does not go nearly as far as it did in 1970. “Money has been losing value ever since. In 1970, it could only buy what $5.62 could buy today. By 1990, it was only worth $1.67 in today’s terms.” There are many reasons for this, but the way this plays out in the US is a gross stagnation of wages:

“Between 2000-2006, average wages remained flat despite an increase of worker productivity of 15%. In those six years, corporate profits increased 13% per year. And that was before the recession! Since the recession, the rich have just gotten richer.” (Source: New York Times, The Rich Get Richer Through the Recovery, September 10, 2013) It is also important to note that, in “2012, the top 10% of earners took home 50% of all income, while the top 1% earned 20% of all income. Those are the highest percentages recorded, dating back at least 100 years.”

While the dollar has lost value and wages have stagnated, the cost of basic essentials in the US has ballooned:

And consider all of the other things that we need to pay for out of these stagnating wages:

What happens when the wages of millions of Americans stagnate for decades and the cost of living goes relentlessly upward? One result that should be obvious is that Americans cannot save much, and they go into debt – to pay not only for discretionary items but also for necessities. And this is what we find when we check the facts.

It’s instructive to compare savings rates between the US and a sampling of European countries (keeping in mind that Europeans pay higher taxes we do). While the gross savings of Americans as a percentage of GDP in 2012 was only 17%, the rates in Belgium, Denmark, Germany, the Netherlands and Sweden were in the 20 percent range, while Norwegians and Swiss saved 30% and 33% respectively. In fact, the average savings rate for all of Europe is 38%, and Europeans have almost no college debt.

This is a bleak situation for Americans! What can we do about it? Many Americans put the responsibility, if not also the blame, squarely on the shoulders of individuals and disparage any role for government. A random reading of comments about any number of issues reveals this stance. In the January 4, 2016, issue of USA Today, for instance, a respondent (presumably an American) expressed this opinion about part-time workers who cannot get Medicaid or employer-paid health care coverage: “If you work hard, you shouldn’t need assistance. You’re not rich, but have enough to get by without help” (@Beastworking). In the same issue of USA Today, respondents discussing low-wage workers who still lack health coverage made these comments:

While we all know people who might be considered lazy, it is difficult to use that description for the millions of Americans who are working two or three jobs at minimum wage and are still barely able to pay for food and rent, let alone pay for their own health care. Thus, contrary to the suggestion of one of the USA Today respondents but held by many, these are Americans who often do not “have enough to get by without help.” I challenge Americans holding the individualistic approach to name progressives in the US who do not take responsibility for themselves or who truly advocate not taking responsibility or working for a living. The pervasive punitive attitude of many Americans toward their fellow citizens who are struggling, therefore, is not only callous but also shows a disturbing misunderstanding of reality. Their suggestions for solving our pervasive social problems – basically unfounded opinions and prejudices, with little basis in fact – do not provide workable solutions in any way, shape or form.

The solution, rather, lies in the kinds of steps Europeans have been taking for 60 years. Europeans are highly prosperous and productive on the whole, so it is difficult to argue that they are irresponsible or lazy. Rather, as Hill points out in Europe’s Promise, they take a common good approach that puts responsibility on society at large, not solely on individuals:

There is good American precedent for trying similar initiatives. In the 1930s, President Franklin Roosevelt faced problems very similar to those we face today. Good government can and must play a significant role in boosting wages, allowing Americans to save more, and reducing debt. But good government is not an amorphous, evil bureaucracy that exists for itself and imposes its will on citizens. As Roosevelt reminds us:

“. . . government is ourselves and not an alien power over us. The ultimate rulers of our democracy are not a President and senators and congressmen and government officials, but the voters of this country.” 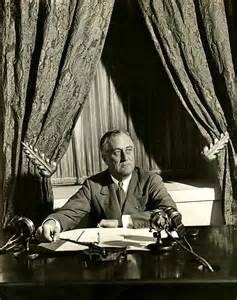