Making a pilgrimage to a sacred or special location is an age-old practice; practitioners of most religious traditions and many others have undertaken spiritual journeys to seek meaning, look “for their heart’s desire,” to heal, and to “find a more authentic home” (Kujawa-Holbrook 8). How, though, can someone with limited funds, mobility issues or other constraints undertake a pilgrimage? Are such quests out of their reach?

In this day and age, we have options. Based on a suggestion from my friend and colleague the Rev. Dr. Sheryl Kujawa-Holbrook in her 2013 book, Pilgrimage – The Sacred Art: Journey to the Center of the Heart, I had a brainstorm. I could do a “virtual pilgrimage” by “visiting” websites! Admittedly it is not quite the same – but my traveling days are over, for many reasons, and I decided I could learn a lot, perhaps even more, by reading information online. 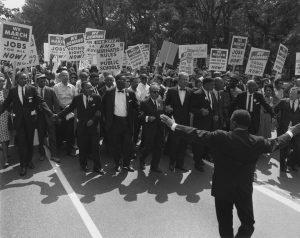 A virtual pilgrimage can focus on an array of milieus and sites, as long as they have fairly robust websites; I had thought awhile ago that I could visit civil rights sites in person in Alabama, but since that was not going to happen, I chose to visit sites via computer.

When I initially thought that I might travel physically to Alabama, I requested the 2018 edition of Sweet Home Alabama, the “official vacation guide of the Alabama Tourism Department.” I knew that I wanted to “do” Birmingham, Selma and Montgomery, and I chose the sites in that order as if I were traveling roughly from north to south. (Having studied racial issues for two decades, I was already familiar with most of the well-known sites, which is partly why I chose those cities.) The vacation guide, geared toward tourists, supplied information on many sites not related to the Civil Rights Movement, but it did list the appropriate sites with their websites, which I recorded in a separate document. I did this research and preparation months in advance. One of the impetuses of an actual pilgrimage is to embark on a spiritual practice that awakens us to the present moment and opens our hearts (Kujawa-Holbrook 169), so taking one’s time with preparation allows for insights to “sink in.”

My basic goals were:

Some of the principles under which I operated included:

“O Divine Love, Giver of Mercy and Justice, Mary mother of Jesus, and my Spirit Guides: Guide my virtual steps today as I visit sites of anguish, pain, empathy and inspiration. Help me to honor in my heart these innocent souls who suffered and died in bondage or oppression. Help me to strengthen others, if possible, by my virtual experience. Lead me on a path of love and compassion, toward those who have suffered in the past; for those who continue today to suffer from the effects of our nation’s past; and for those who are in bondage to supremacist and racist beliefs. Amen.”

“O Divine Love, Giver of Mercy and Justice, Mary mother of Jesus, and my Spirit Guides: Thank you for this opportunity to visit sites of anguish, pain, empathy and inspiration. Thank you for helping me to honor in my heart these innocent souls who suffered and died in bondage or oppression. Help me now to strengthen others by my virtual experience. Help me to travel the path of love and compassion, toward those who have suffered in the past; for those who continue today to suffer from the effects of our nation’s past; and for those who are in bondage to supremacist and racist beliefs. Amen.”

Birmingham Civil Rights National Monument. While I found some distracting typos and repetitions on the site (which belongs to the National Park Service [NPS]), it contained a good overview of the history of civil rights. It focused not only on blacks but also American Indians and Hispanics, Japanese internment camps, and laws against Chinese immigrants. I discovered new information that I had not come across before, since the history starts in 1941 with Franklin Delano Roosevelt. There were sidebar articles on several topics, and I chose to read two, which were well done and informative: one on Eleanor Roosevelt on her visit to the internment camp at Gila River and one on the Tuskegee Airmen. In a section on the Modern Civil Rights Movement, 1954-1964, I learned a great deal about some of the less-well-known players and leaders.

16th Street Baptist Church, known primarily for the tragic bombing on September 15, 1963, which killed four girls attending Sunday School. At this site, I focused on the civil rights history, but “pilgrims” can also find information about the church’s mission and life today.

Birmingham Civil Rights Institute. When I noticed that the Education tab was more specifically for educators and parents, I turned my attention to the Exhibits tab. Unfortunately, I found the site annoying and user-unfriendly: it jumped around a fair amount, and there was very little information attached to the exhibit photos, as far as I could tell.

The Resource Gallery was more helpful. One section, “Profiles in Courage Here and Now,” showcases photos by Chester Higgins, Jr., of individuals from the Civil Rights Movement. A visitor can choose to watch interviews with these activists. (A downside was that I could not determine the length of each interview nor how to leave the video without going all the way back to a previous web page; others may have better luck.) The portraits are evenly divided between men and women. Several of the activists featured appear to be ordained clergy, showing the relevance of religion in the lives of civil rights activists.

Another weakness was that some tabs seemed incomplete, e.g., April 2019, which started with an article about Jackie Robinson Day but did not go anywhere after a couple of sentences… The Shuttlesworth 2017 tab/article, on the other hand, was interesting and informative.

Kelly Ingram Park. This site presented a good summary of the events that took place at the park in May 1963. An NPS site, it leads to other, non-Birmingham civil rights sites around the country.

Historic Bethel Baptist Church. This site was a little confusing to navigate, but I eventually found two pages with interesting and inspiring information about the Rev. Fred Shuttlesworth, the 1956 Alabama Circuit Court injunction against the NAACP, and the founding of the Alabama Christian Movement for Human Rights (ACMHR). Interestingly, there is actually not too much about the 1956 bombing of Bethel Baptist Church except photos and some quotes from Rev. Shuttlesworth. (I had to look elsewhere to learn that that bombing took place in December 1956.)

Negro Southern League Museum. This is mainly for baseball enthusiasts as far as I can tell.

Ancient Africa Enslavement and Civil War Museum. Unfortunately, this site came with a message: “This domain name expired on 6/23/2019 and is pending renewal or deletion.”

Selma, official website. The main history of Selma is well-edited and quite objective in describing the Civil War battle that destroyed the city. This history also includes an inspiring story of the former slave and wealthy Selma man, Benjamin Sterling Turner, who became Alabama’s first African American elected to the US House of Representatives.

He became wealthy by saving up “what portion of the earnings he could from his role as manager of a hotel and stable in downtown Selma.” Among the many things he did as a US representative was to work “to restore legal rights to Ex-Confederates.” (Right after the war, Turner “helped establish the first school in Selma for African American children.”)

This site is not at all “Lost Cause” or pro-Confederacy and definitely anti-segregationist – very impressive!

Other parts of the site include photos and short descriptions of the Edmund Pettus Bridge and Heritage Village. Another less well-known (to me anyway) was a page on the Old Cahawba Archaeological Park. This was well-written and very interesting, with quite a few separate web pages describing different aspects of the site. A few of the pages are incomplete.

National Voting Rights Museum and Institute. This website is not very extensive. It shows that the museum itself boasts many galleries to visit physically, but there were no internet links.

Other sites in Selma that are relevant to the Civil Rights Movement but not congenial to a virtual pilgrimage include the MLK Street Historic Walking Tour, the Old Town Historic District, and Selma’s Riverfront Park.

With some exceptions, the Birmingham and Selma sites are well worth a visit for those who wish to learn about the Civil Rights Movement in Alabama. In Part II, we will “travel” to Montgomery.

Kujawa-Holbrook, Sheryl A. Pilgrimage – The Sacred Art: Journey to the Center of the Heart. Woodstock, VT: SkyLight Paths Publishing, 2013.